We’re a leading data-driven job search company. Every day we index millions of job openings directly from employer websites. As a result, we provide premium job search for job seekers, valuable exposure for employers, and insightful job market data for all.

Our Mission: To empower people with knowledge and insights through perfect job information. With the highest-quality index of global job listings, we enable people to find great jobs, superior candidates, and brilliant labor market insights. And by being deeply rooted at the intersection of these three, we are transforming the job market. 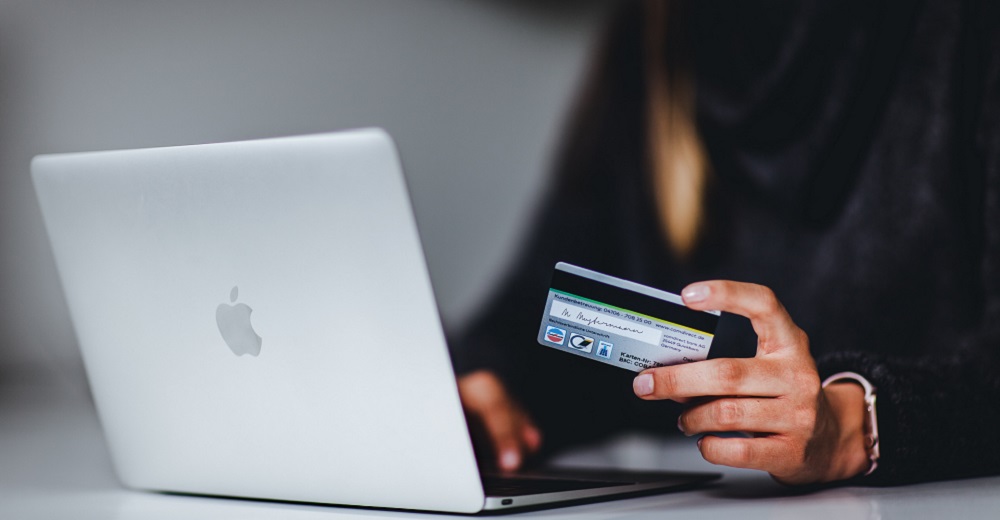 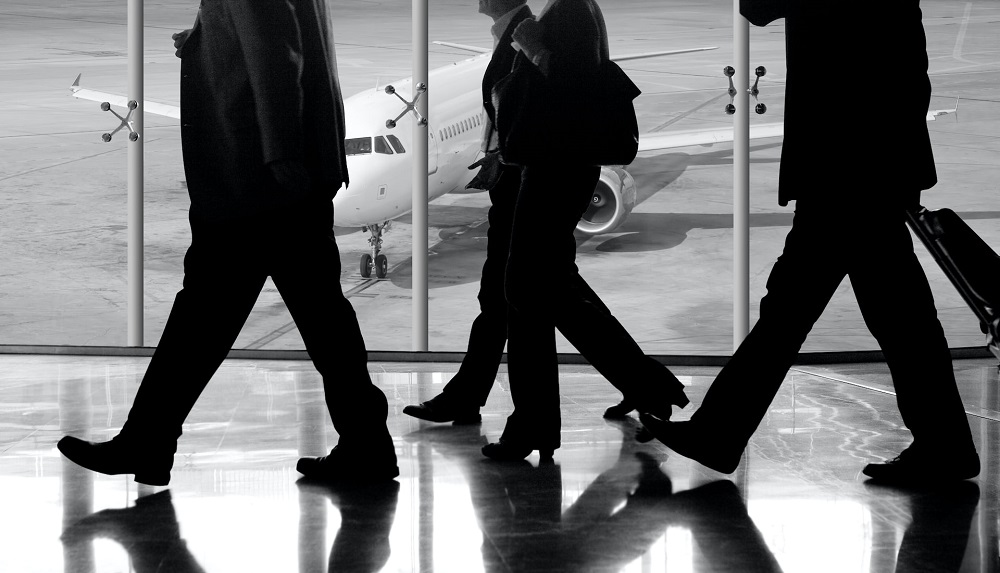 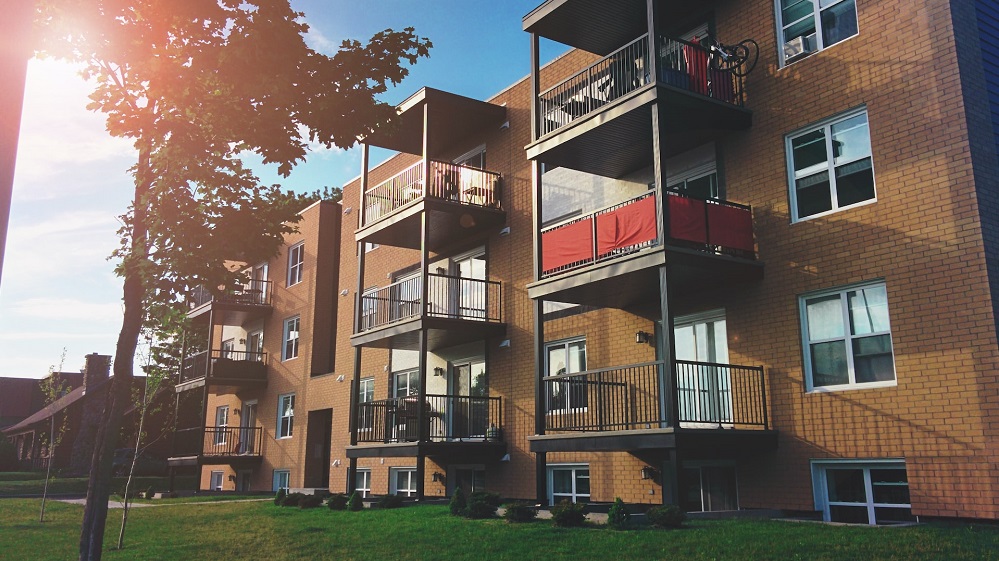 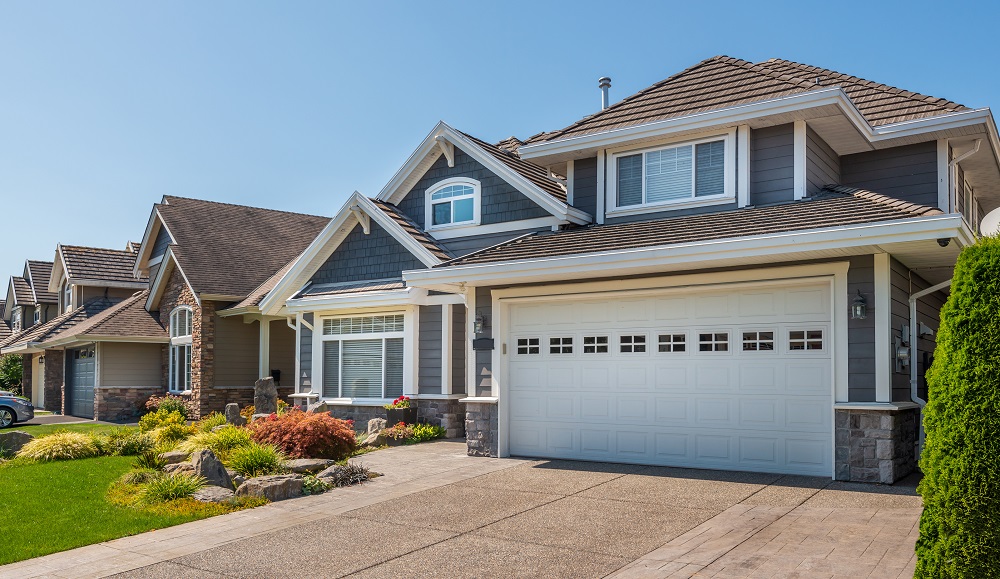 How is the U.S. Homeownership Rate Climbing to 11-Year Highs?
RealPage 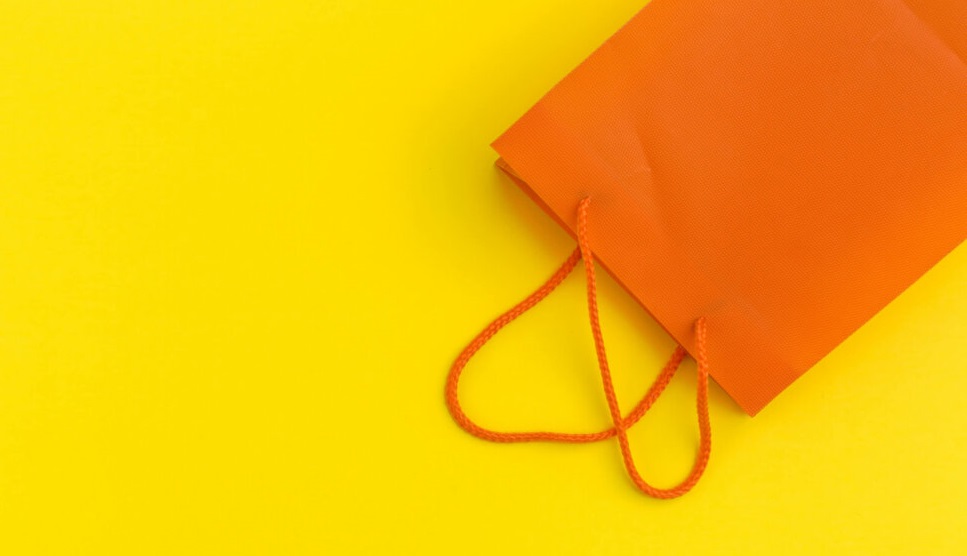 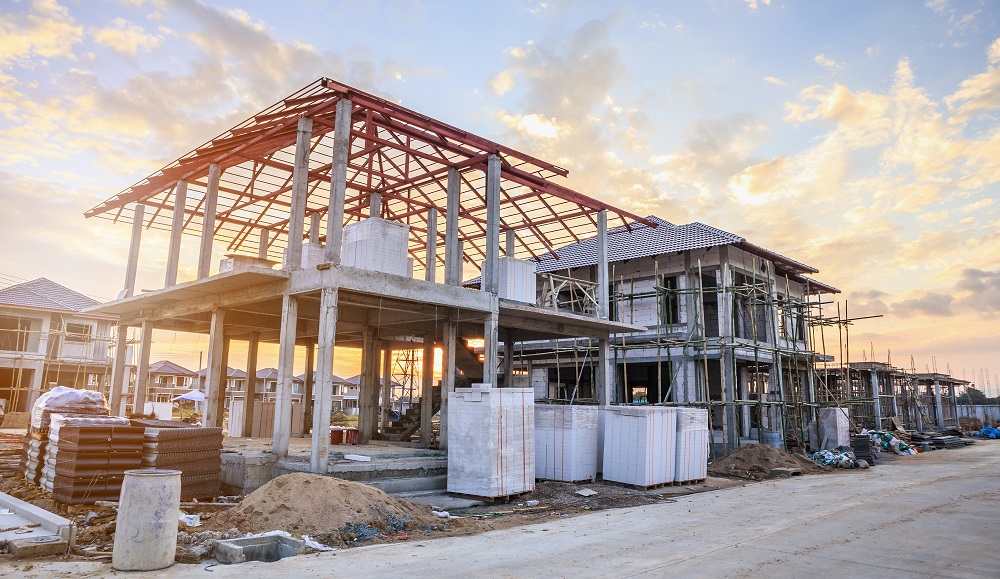 On October 4th, the Bureau of Labor Statistics (BLS) will be releasing its JOLTS data for August that will include the much-anticipated job openings data for the month. Based on LinkUp’s job listings data sourced directly from company websites in July and August, we are forecasting that job openings in the U.S. declined last month, dropping 2.6% to ​​10,950,000.
READ MORE
August 8, 2022 / Economy

Heads I Win, Tails You Lose; Reflections on the Still-Cooling But Strong Job Market 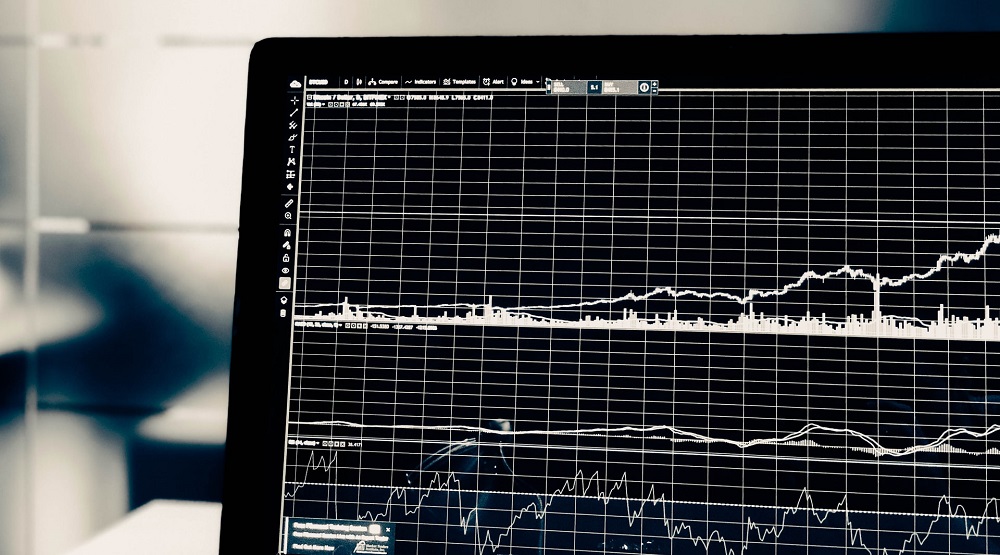 As we stated in a blog post last June, and it’s even more the case today, at no time in the past 20 years has the intensity of the focus on the job market been stronger. While the economy has successfully recovered from the Covid cataclysm, our landscape has been permanently altered by the tectonic shifts that rocked the world and deep aftershocks continue to reverberate throughout every aspect of post-pandemic (maybe some day?!) life.
READ MORE
July 29, 2022 / Economy

A peek at job listings during hiring slowdowns

Over the past few months, a number of high-profile employers have announced hiring slowdowns or all-out hiring freezes. In this post, we will take a quick look at the recent job listings trends from some of the companies reporting earnings this week. First, let’s check in on the companies we have already seen announce hiring slowdowns or freezes. The blue line in each chart indicates when these slowdowns were first announced, worth noting that many of these announcements came after job listings had been slashed and the data we provide was predictive of such an announcement.
READ MORE
July 11, 2022 / Business 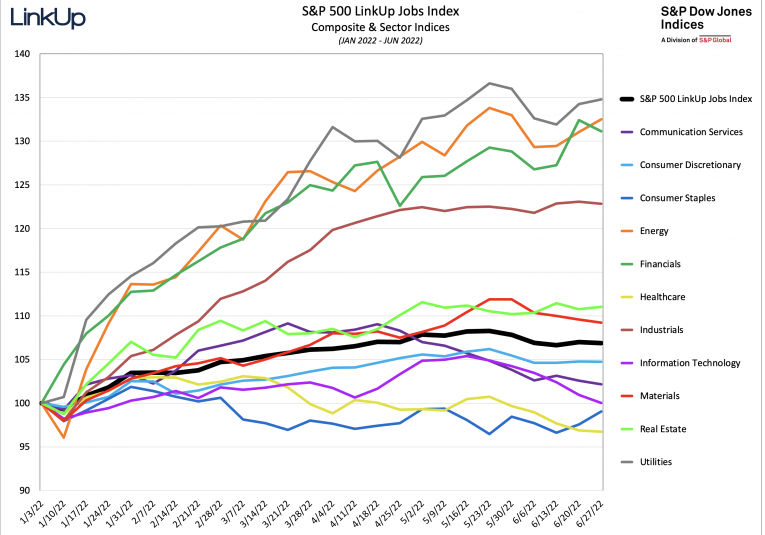 Having just returned from some time off and a tight deadline before tomorrow’s jobs report, I’ll skip the job market commentary this month and jump straight to our jobs data and our corresponding non-farm payroll forecast for June. In June, total job openings dropped 3% while new and removed jobs rose 1% and 3% respectively. Labor demand dropped 10% in the 2nd quarter and with the continued decline in total job openings in June, labor demand has returned once again to where it was last August.
READ MORE
June 23, 2022 / Business

Last week, Apple launched Apple Pay Later at its annual developer conference. Apple Pay Later allows iPhone and Mac users in the United States to pay for purchases in four payments over the span of 6 weeks, with no interest or other fees. The announcement is big for the new industry. Apple is delving into one of the hottest areas of consumer finance, a service called buy now, pay later (BNPL). Consumers using BNPL can stretch payments for an item over a few weeks or months.
READ MORE
June 20, 2022 / Economy

Feelings of dread around the inflation rate, sunken stock prices, and recession fears still loom, of course. And hiring slowdowns are being experienced across industries, occupations, and business types. Created job listings at both public and private companies have been in sync since 2020, with sharp decreases seen in all markets lately, as hiring slows. At the industry level, companies with the largest drops in job listings in May include those in: Utilities (-8.8%); Information (-7.3%); and Transportation and Warehousing (-6.8%).
READ MORE
June 2, 2022 / Economy

How is online apparel reacting to high inflation? (let’s look at their jobs) 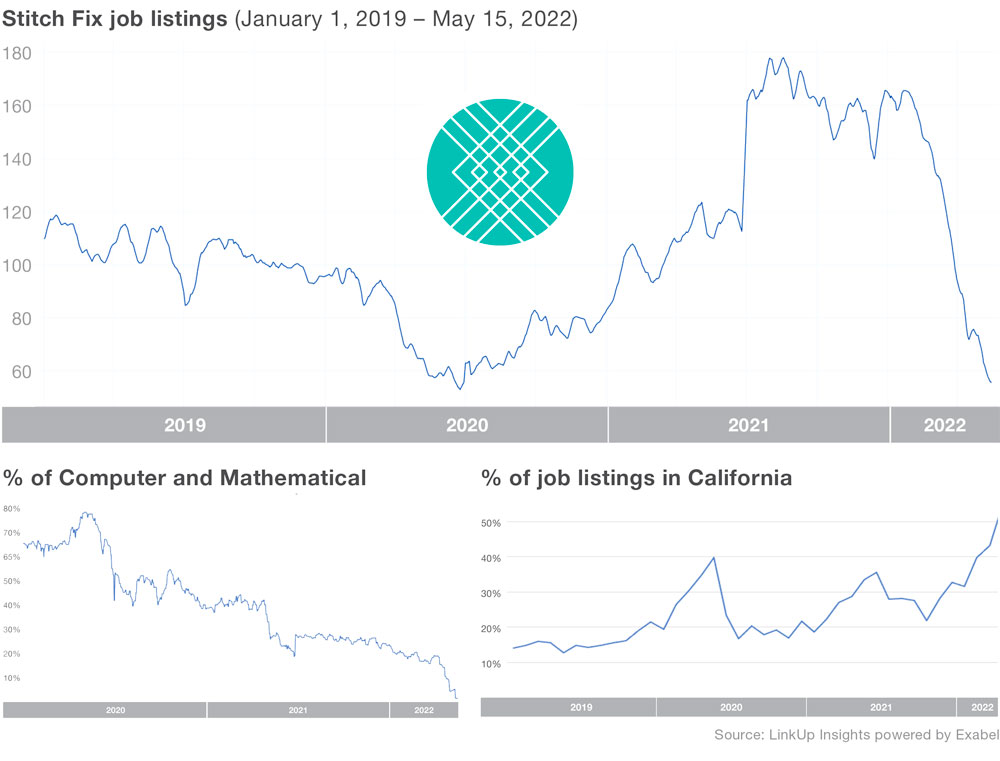 A recession is starting to look like a possibility. Household budgets are being squeezed by decades of rising inflation, housing costs are continually breaking records, and consumer confidence is plummeting. As a result, customers are less likely to spend money on non-essential things. The apparel industry bears the brunt of the impact. Consumers can easily trade down for less expensive items and stretch out the lifespan of their existing wardrobe. It’s easy to slash spending on apparel when times are tough.
READ MORE
May 19, 2022 / Economy

After the four previous months of slow, yet steady job listings growth, April jobs data shows employers are removing job postings and putting a pause on recruitment. With the uncertainty in the economy and increased interest rates businesses are being more conservative when hiring. Total active job listings in the U.S. were down by 3.1%, affecting nearly every occupation, industry, and state. Job listings with the highest rates of decline were concentrated in Healthcare, with listings down more than 5%. [](https://blog.linkup.com/data-seekers/wp-content/uploads/sites/4/2022/05/LinkUpRecapMapApr2022.jpg)
READ MORE
May 13, 2022 / Business

Tesla, the world’s most famous electric vehicle giant, reported its first-quarter performance on April 20th, with impressive margins and increasing sales. The company detailed revenues of $18.76 billion and $2.86 in earnings per share, up from $10.389 billion in revenue and 93 cents in earnings per share in Q1 2021. On the company’s earnings call, CEO Elon Musk said the company plans to bring a dedicated robotaxi to market by 2024. The dedicated robotaxi will be highly optimized for autonomy, meaning it would not have a steering wheel or pedals.
READ MORE
April 22, 2022 / Business 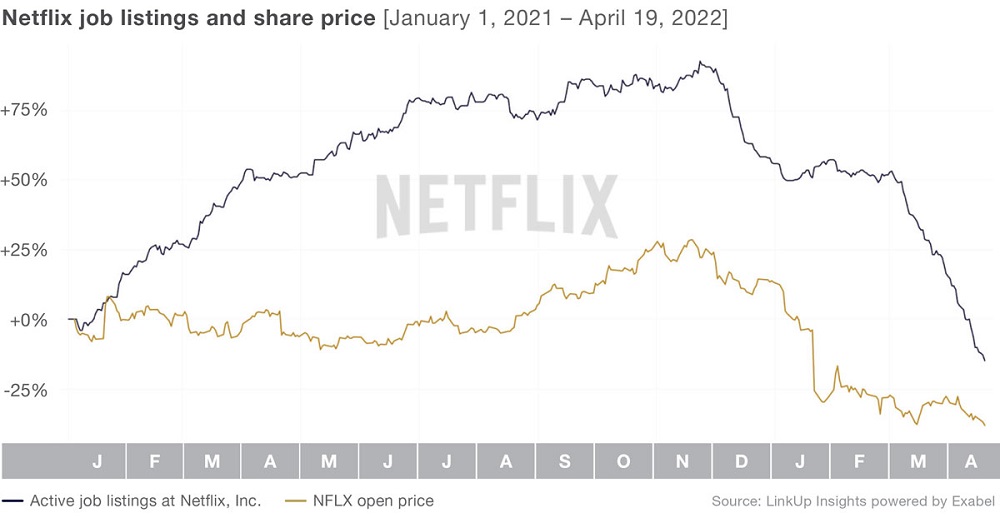 Netflix stock has plunged after their most recent earnings call—and their job listings have been doing the same over the past year. As we called out in our recent post, Netflix was the only company in the FANGMAT group with a decrease in job listings recently (down 121% since December 2021). And share prices have fallen sharply since Netflix reported its first loss of subscribers in over 10 years.
READ MORE
April 12, 2022 / Business

Of the many ways that the pandemic has shifted our habits, one that is especially noteworthy in consumer behavior is how we buy our groceries. When the first wave of the corona virus caused many of us to stay at home, demand for groceries, meals, and other packaged goods delivered right to our door skyrocketed. Prior to 2020, the eGrocery category was a “nice-to-have” rather than a “must-have” for most. It is now growing rapidly—especially with younger generations.
READ MORE
April 8, 2022 / Business 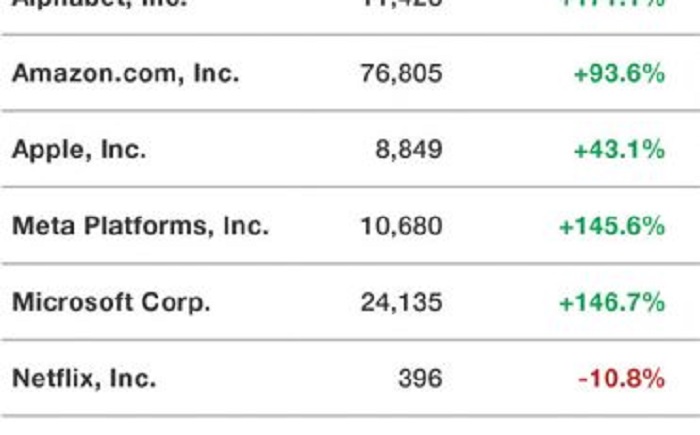 Always, almost annoyingly, in the spotlight, yet undeniably holding our interest — FANG, FAANG, FANGMA, FANGMAT companies. And of course their associated stocks: highly priced, some say overvalued, dominating, and also surrounded by speculation. Right now, FANGMAT = Facebook, ​​Amazon, Netflix, Google’s parent company Alphabet, Microsoft, Apple, and Tesla. FANGMAT includes the five most heavily weighted stocks in the S&P 500, and accounts for over 25% of constituents by weight. And while valuations seem high, portfolios underperformed without them.
READ MORE
March 3, 2022 / Economy

Shopify’s post-earnings drop worries investors, but it may not be all bad news 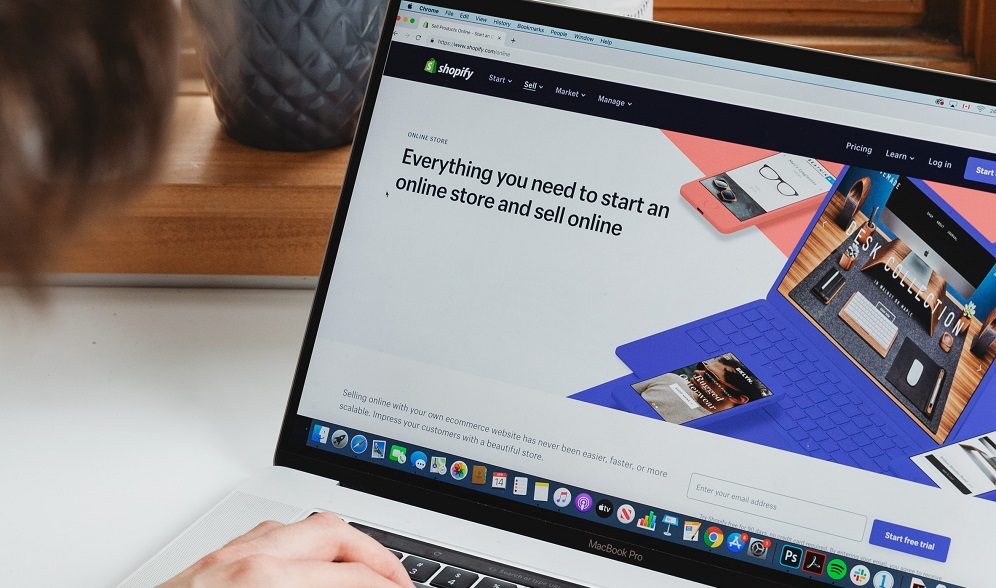 Shopify’s ( $SHOP ) software and services provide relatively simple solutions for helping people and businesses sell things online. This was a power position in the early days of the pandemic when businesses were strongly compelled to embrace e-commerce. During that time, Shopify provided the path of least resistance and it quickly became the default choice.
READ MORE
March 2, 2022 / Economy

Jobs data on Dollar Tree ahead of earnings report 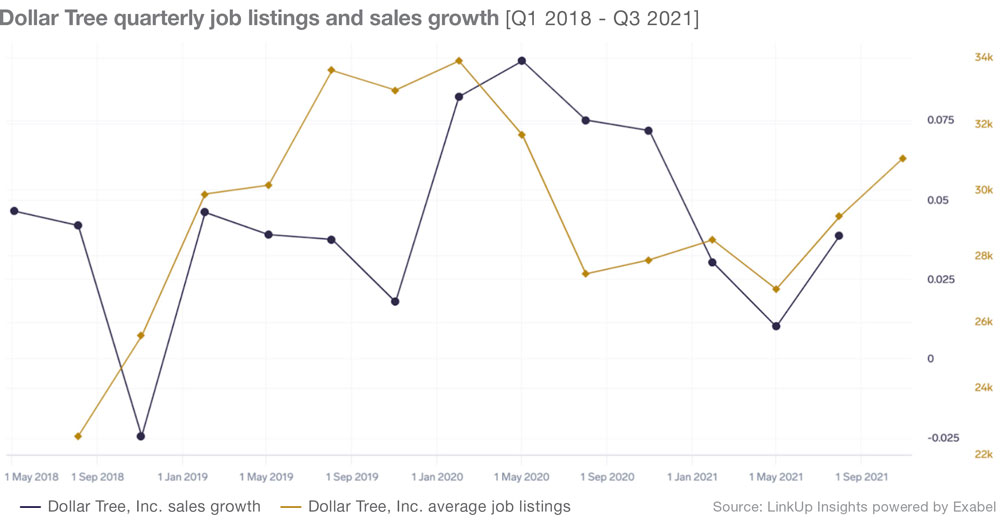 Dollar Tree is due to report earnings Wednesday and seems to be in a very interesting position. On one hand, they announced last quarter they would be raising their prices, after testing and finding customers would tolerate these price increases. On the other hand, reports have been recently released that they will have to shut down 400 stores indefinitely due to a rodent infestation.
READ MORE
February 24, 2022 / Business

With HP and Dell’s earnings releases right around the corner, there are rumblings that Dell is expected to beat estimates. Given this optimistic outlook, we thought it would be worth taking a quick 2-minute look at these companies’ recent hiring patterns using Linkup’s Insights platform, just to see whether we can add evidence to confirm or deny the existing narrative, and if we can provide a better understanding of the future demand both companies can expect.
READ MORE
February 18, 2022 / Economy

For the first month of 2022, active job listings in the U.S. were, for the most part in a somewhat steady holding pattern, up just 0.3% over December. When we drill down to the occupation level we see some hidden booms (hello, Food Service and Computer and Mathematical occupations) and slides (we see you Healthcare, Transportation and Supply Chain). But overall things remained on a relatively even keel in January.
READ MORE
February 10, 2022 / Business

Amazon’s most recent earnings call brought attention to numerous interesting figures; several that are worth digging into from a job posting perspective. Amazon touches many different sectors, but arguably the most interesting details from the earnings calls were to be found in its eCommerce and web services. When Comparing Amazon to some of its larger peers in the space, it seems to be doing well, with job listing growth outperforming Target, Walmart, and Alibaba.
READ MORE
February 8, 2022 / Economy

Initial filings for jobless claims declined for the second week in a row at the end of January, indicating that the labor market is recovering from the temporary disruption caused by the Omicron variant. According to the newest Unemployment Insurance Weekly Claims Report released on February 3rd, initial jobless claims, a proxy for layoffs, fell to 238,000 for the week ended January 29th, a decrease of 23,000 from the revised level the week before.
READ MORE
January 13, 2022 / Economy

ESG investing on the rise

Escalating urgency behind the ongoing climate crisis continues to drive many facets of the economy forward. From growing technologies like electric vehicles to areas of potential job creation like infrastructure, opportunities to benefit from our collective problem solving abilities abound. But now we’re witnessing an interesting shift among investors, toward funds with more sustainable stocks. Those new to the market and seasoned investors are both showing interest in companies making measurable impact in addressing important environmental issues, as well as the social issues that fuel them
READ MORE
December 14, 2021 / Business

Lululemon and Peloton face off 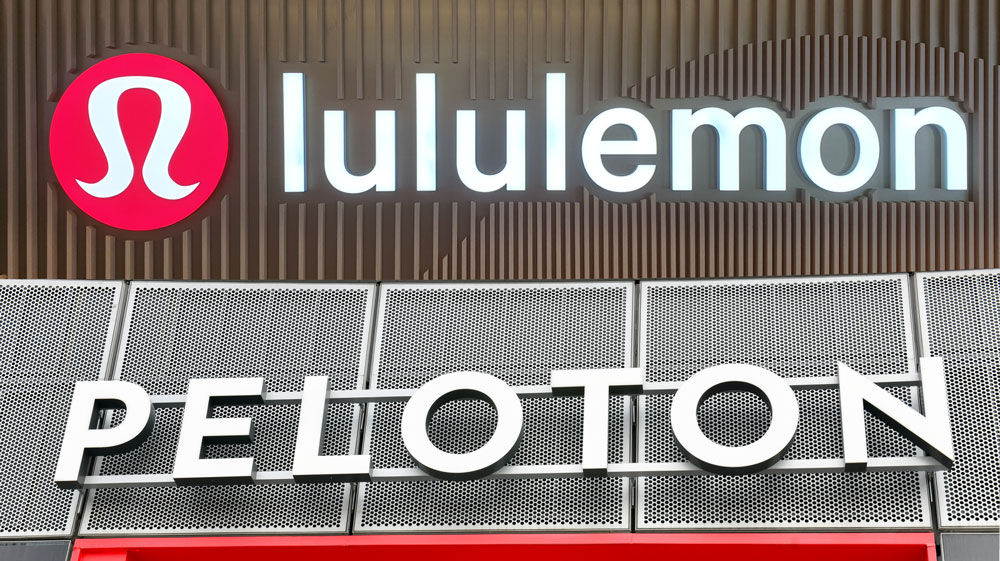 Peloton is trying to eat Lululemon’s lunch, or protein-enhanced kale meal replacement smoothie, as the case may be. The high-end athletic apparel retailer filed suit against Peloton in late November, stating the fitness company’s designs for their new line of leggings and sports bras constitute patent infringement. Filed in the U.S. District Court for the Central District of California, the lawsuit finds Lululemon seeking an injunction against Peloton, in addition to a jury trial, damages and other monetary relief.
READ MORE 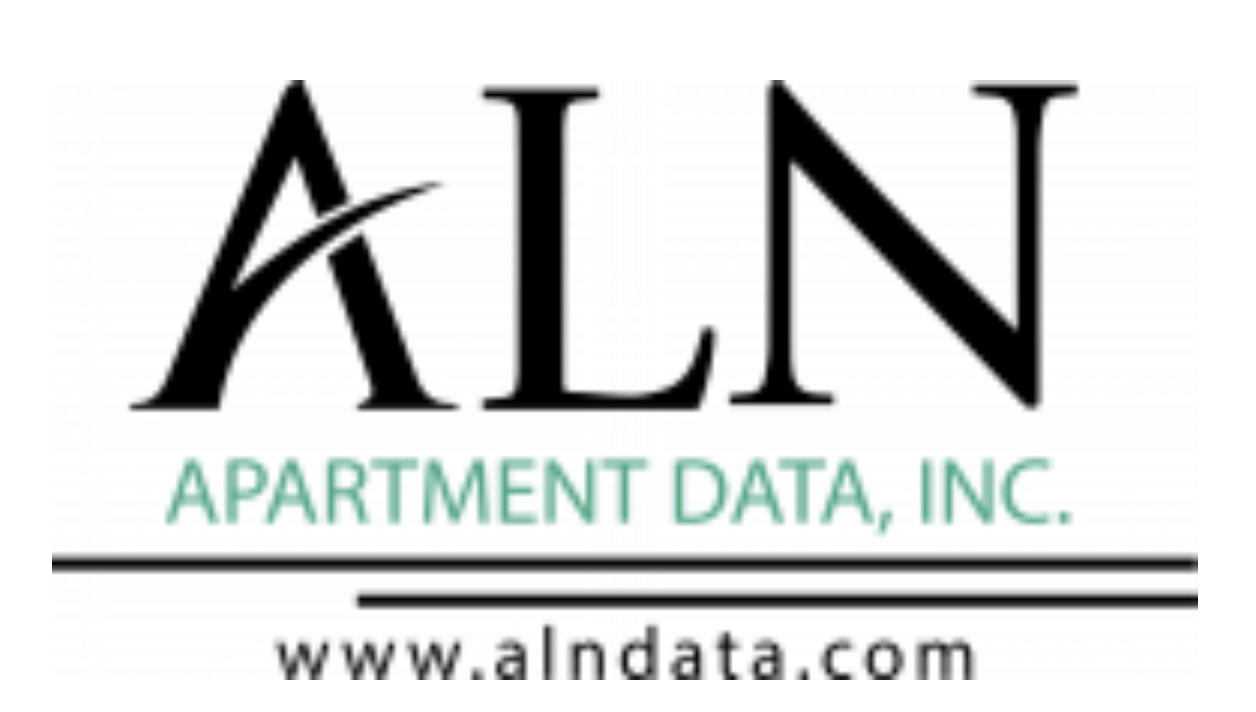 How is the U.S. Homeownership Rate Climbing to 11-Year Highs? 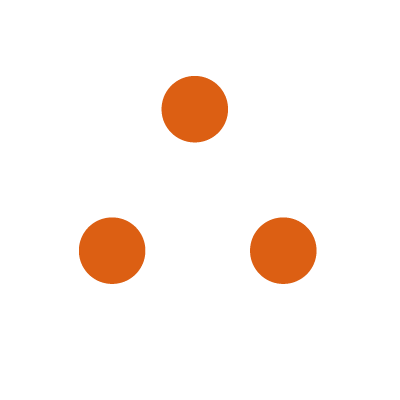